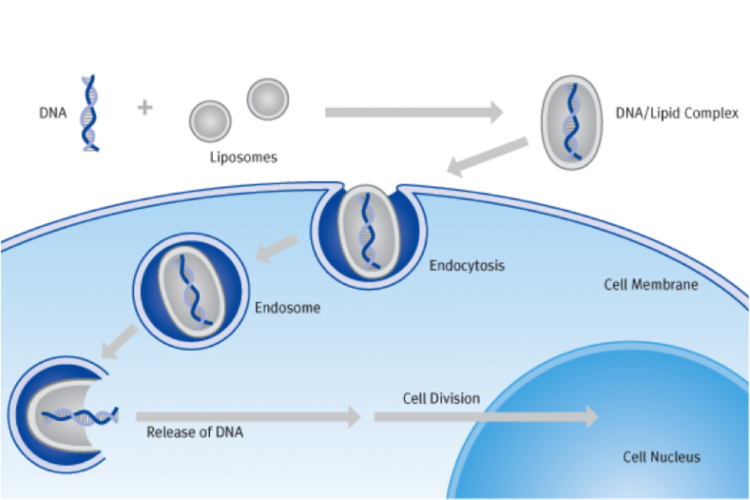 Cells that are transfected transiently express the foreign gene but do not get integrated into the genome. As a result, no replication takes place. Consequently, the foreign gene is expressed in the cell for a certain finite period of time and then is lost through cell division or other factors.

Has the foreign gene been transfected?

Also, to distinguish between stable and transient transfected cells, the researchers add selectable markers and verify the different types. Normally, what they do is add antibiotic markers to the cells which they transfect transiently and stably in such a way that the stable cells are resistant to the antibiotic and transient cells are not resistant to the antibiotic. Hence, only the stable transfected cells are going to last for longer in the cell and replicated in future generations

Transient transfections are preferred in experiments that are short term and transient transfection is often used for studying the effects of short-term expression of gene or gene products or small-scale protein production. On the contrary, stable transfection is done for long – term and prolonged experiments for example for long term protein production, preparation of drugs or pharmaceutical industry, gene regulation or gene therapy.

Now, these two different types of transfections can be done in four different ways. They include Calcium phosphate method, Electroporation, Viral Methods and Lipofection. Our main focus is on Lipofection as for now we sell only the Lipofection product named as Lipotransfectin.

It is a widely used method for introducing foreign DNA plasmids into cells. The method was first described in 1973 by Graham and Van der Ebb. The calcium phosphate transfection technique involves the precipitation of DNA and Calcium phosphate allowing the formation of small complexes that get internalised into a cell and eventually gets transfected.

The cost- efficiency and simplicity of the method allows its use in many different cultures, this method can accommodate a high concentration of DNA. One of the drawbacks is that the Calcium Phosphate method has only 10% efficiency. Also, sometimes the calcium phosphate can disrupt the cell membrane and cause cell death. Thus, it is not suitable for protocols that require a long incubation period.

A method used to apply an electric current across the cell membrane of a particular cell which leads to the formation of a temporary pore. This “pore” helps in the transfer of exogenous materials from the medium to the cytoplasm or nucleus and thus transfecting the cell. Some of the advantages of Electroporation include its versatility of being effective with almost all the different cell types.

The amount of DNA required for electroporation is much lesser than the other procedures. The disadvantages include cell damage which occurs if the pulses are of the wrong length or intensity which can cause a larger pore than needed or a smaller pore which would lead to cell rupture. Also, the transport of material in and out of the cell is non-specific and can lead to ion imbalance and ultimately cell rupture.

The advantages of using the viral methods include the simplicity and effortlessness of the viral infection, works well in vivo and also in vitro and the high gene delivery efficiency which has an amazing range of 95-100%. The viral method, unlike the other methods, seems like it has more disadvantages than advantages. It is a labour intensive task which not only requires performing the task manually but also keeping a close watch on the task. Also, it requires many approvals from various esteemed institutions and review boards, P2 containment required for most of the viruses, most of the viruses are lytic and require packaging of cell lines. As a result, the best time to use this method is for introducing a single cloned gene only that needs to be highly expressed.

Lipofection refers to the method where a lipid (mostly cationic) is used to absorb the nucleic acid into the cell, the genetic material is transferred into the cell with the help of liposomes. Liposomes are vesicles or components that can fuse with the cell membrane. The following complex formed is referred to as Lipoplex. The advantages of lipofection include high efficiency, ability to transfect different types of nucleic acid in a broad range of cell types, reproducibility, easy to handle and use,

The advantages of lipofection include high efficiency, ability to transfect different types of nucleic acid in a broad range of cell types, reproducibility, easy to handle and use, the ability to deliver DNA, RNA and proteins, low toxicity. The main disadvantage is its total dependence on the cell type and culture medium efficiency, it demands optimised conditions of transfection reagents and culture mediums.

Lipofection is a state-of-the-art transfection agent for exclusive use in mammalian cell research. Its novel composition combines RMA (Repulsive Membrane Acidolysis) technology with a new Toxic Optimised module (TOP-technologies). It regulates the release of genetic material (DNA and RNA), reducing toxicity and increasing the efficiency of transfection.

Technical specifications of the supply:

2 – Lipotransfectin is used with a much simpler protocol compared to other similar agents of other brands. It can be used with presence or absence of serum in the culture medium. The effectiveness of the product remains unaffected.

Lipotransfectin will be provided to the user at an ambient temperature. It is advisable to store the product at -15 ºC to avoid the natural ageing process of the liposomes. There is no evidence of degradation of the product by successive freezing and thawing.